Allah Sears was accused of second-degree murder and manslaughter charges related to the death of Damon Henderson. Through diligent work, Mark Fonte made the case to the jury by presenting that the cases was based on witness accounts and circumstantial evidence, “You’re going to hear from witnesses that this group, for the lack of a better term, are a bunch of thugs”. Fonte claimed the men in the car called Sears over, at which time Damon Henderson pulled out a gun and fired at Sears. 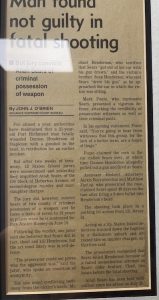